Hope comes in many forms.
As I walk my journey of heart break, betrayal, and the devastating consequences of a narcissistic, cheating spouse and his self-seeking girlfriend in my life, God inserts kinder, gentler, inspiring people to remind me that my ex and the other woman are only two crumby people in a huge world that have lived on and crossed my path, temporarily blocking my way.
David Smith, photographed below in a standing bow posture, is one of the many better people that have appeared in my life, since my separation.  He arrived at the perfect time. David Smith and I take Bikram yoga classes together. In 2015, he was so kind in emailing me encouraging messages pertaining to my yoga practice, my running and my life situation. I thought it was the coach in him but I have realized that his own life experiences, which could have embittered him, and did, (he thinks it caused his cancer) have made him the amazing man that he is today.
I wanted to share one aspect of his life, as I wait for the results of my own cancer diagnosis, just as an offer of hope and encouragement. Maybe what we interpret as a death sentence is only an opportunity for a better life. 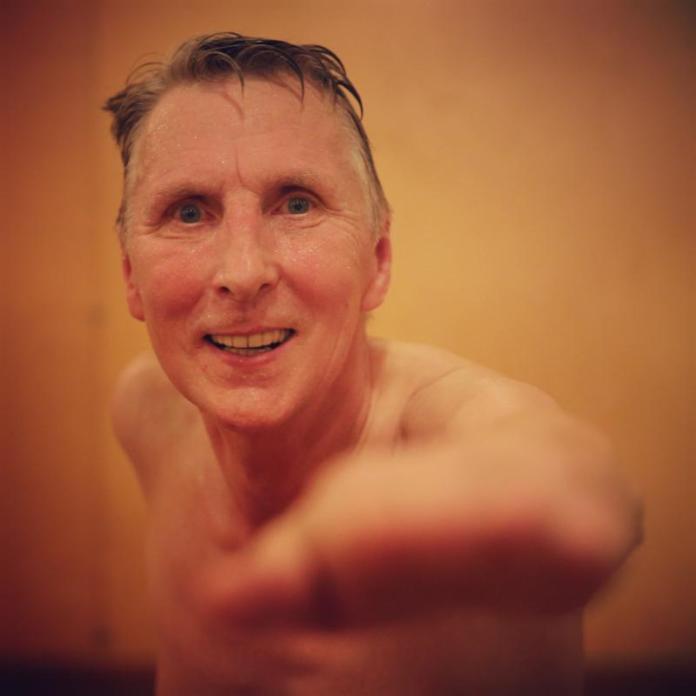 DAVID SMITH:
MY YOGA STORY
Being diagnosed with terminal cancer is a real shock to say the least. Cancer comes in many varieties. Unluckily, mine was diagnosed as the most aggressive you can get. It had spread to twenty locations from behind the lungs to the pelvis. It was on the move to the brain, bones or both, next.
Cancer and its treatment are extremely hard on the body. From 2011 to 2014 I received four surgical procedures, the key one failed and was aborted. A dizzying array of nasty meds, fifty two radiation treatments and forty five radioactive seed implants followed. During and after all this treatment my immune system was nonexistent as all critical blood values dipped well below normal ranges. Testosterone, a critical male hormone wasn’t just low, it went to zero as did strength and energy levels. My weight shot up from 170 to 208 lbs, almost overnight.
Did I mention that I run my own business? It was not doing great as well.
Just to add another level of stress and ‘excitement’, when you develop cancer the kooks come out of the woodwork offering a dizzying array of witchcraft and untested home remedies. All unproven and most for money of course. Surprisingly the advice I found most offensive was “stay positive.” You have got to be kidding me! The best advice is to STAY REAL!
Fortunately I had great support from long time employees, my son Tyler (now a Bikram instructor and another dramatic yoga success story), a team of very well qualified doctors in the United States and the Sidney Hot Yoga studio.
Hot Yoga, you have got to be kidding!
I have an extensive competitive cycling background as a member of the Canadian National Team in 1993, and coach to Ryder Hesjedal – arguably one of the best cyclists Canada has ever produced. A Hot Yoga studio was the last place I ever thought I would be. From my sports training background I knew the importance of good nutrition and so eating habits were modified. Not to extremes. Just sensible.
During radiation treatment in Sarasota Florida, Tyler would drag me to the Bikram studio right after treatment before the negative effects took hold.  I would crawl through classes, like it or not. When I returned to Sidney, I suffered through Thirty Day Challenges and even challenged myself to many a double class and even an all-day yoga, doing four classes in one day.
There have been many recent medical studies that are showing that yoga benefits cancer patients. Duhh….of course it does! Instead of “staying positive” you are “living positive.” Surrounding yourself with good energy, positive people and improving your fitness level. Its a no brainer.
My doctors are amazed at how healthy I look and how well I am doing. As one commented, “You are not the man in your medical charts, what is your secret?” I don’t know what the outcome will be. I do know that I am doing WAY better than what was first predicted.
For now the cancer is gone.
What I know too is that hot yoga has played a huge role in the success of the treatments. Aches and pains from of a lifetime of crashes and crazy boat rides are gone as well. There is still everyday stress but it gets handled with a new sense of calm, dignity and confidence. In the end, illness, arthritis, stress or not, I  should have been doing heated yoga all along anyway – Wake up calls come in strange ways.
Thanks to all of you! XXXOOO David
P.S. Please feel free to share this with friends and family, maybe it will help their loved ones. I wish I had a better Standing Bow but oh well!