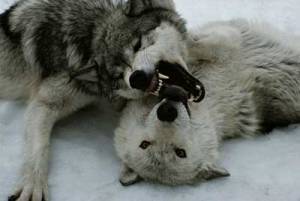 A Cherokee elder was teaching his grandchildren about life.

He said to them, “A fight is going on inside me… it is a terrible fight between two wolves.

This same fight is going on inside of you, and inside every other person, too.”

The children thought about it for a minute. Then one child asked his grandfather,

“Which wolf will win?”

The pack leaders are the alpha male and female. These two animals are dominant over all the other wolves in the pack. The beta wolf comes next acting as the second in command.  The omega wolf is the weakest and least cared for in the pack.  It tends to be bullied by other members and gets the brunt of aggression during inter-pack fighting.  The omega instigates play among the pack as a way to ease tensions.

The alpha male and female get to eat first at kills.  A pack usually consists of 6 wolves but can be anywhere from 2 – 36 wolves. The pack can consist of adult subordinates. They can hunt in packs or singly.  To establish the dominant position they show superiority in their fighting. Wolves are intensely territorial.

Pack rankings are built on strength and the ability to win fights. I’ll let Dave, Janice and the rest of their pack figure out where they rank. If Dave isn’t creative enough to be organizing 11 different user names all trying to attack me and other bloggers or people who have made supportive comments on my site then it is likely Janice, the beta in the group or quite possibly the omega, trying to better themselves and prove their worth amongst the pack.

As they continue to stalk their pray, I will likely not respond and choose instead to let them starve. They can snarl all they want about me taking down my blog.  They can bark all of the lies that Dave has fed them. They can bristle their fur and pounce.  They will be the ones to whimper, running away with their tails between their legs.  My tail is still wagging!