I had my tumor removed yesterday and the doctor felt that it went well.  She also took out a 5 mm perimeter around the tumor and went 5 mm deep.  That sample is off to pathology. I am being referred to a cancer specialist who’s expertise is melanoma.

On February 1 Dave paid me the increase in my support payment as per the court order and a couple of hundred more to start covering the additional court order for arrears and court costs.  On February 2 he sent me a payment of $3000 toward this amount and he said that he will send me another $3000 today and a payment tomorrow to resolve this order.

The doctor was frank and told me that she has seen marks smaller than mine caught earlier than mine be fatal.  My Irish background has the strongest genetic disposition for melanoma and thinks that I will be advised to have genetic testing.  She said that I need to eventually have a discussion with my girls about my diagnosis as they need to be aware for themselves and should also have genetic testing.  She told me that Bob Marley died of melanoma. Obviously he has a very different skin type than me. His was on his foot and it was just thought to be a wart. The feet is apparently the worst place to have melanoma as it tends to be the most aggressive.

Dave has confirmed he is going to go to send us to court again over pet expenses, the dance expenses and some other outstanding special expenses he doesn’t want to pay.  He, also, claimed our older daughter on his taxes as a dependent for his 2014 return when she lived most the time during that year (8 out of the 12 months) with me.  He didn’t even pay child support during that period.  He knows that wasn’t right but it is more to his tax advantage.  That doesn’t matter and now I am being taxed $732 for rightfully claiming her.  I told Dave that he can pay me that amount if his tax savings is more and it has to be by February 5 so I don’t have to pay interest or this will become another Revenue Canada (he can be reassessed and have to pay more plus interest) and another legal issue.  He said he isn’t paying and is going to fight his support payments because he thinks he missed something in mediation in my documentation that may have affected what he is paying.

The cancerous mark on my right upper shoulder is actually called an “ugly duckling”. I am attaching a picture just so you can see what it looks like in case you ever see this on your body or some one else’s body. 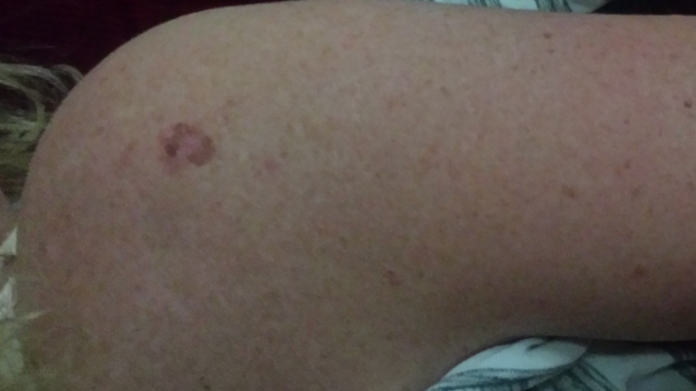 I am getting very adept at identifying the unreasonable, misplaced anger, blame and threatening dialogue of my ex.

He has been fairly consistent at picking up our daughter on Thursday night to take her to get dinner. He usually picks her up at 5:30 and drops her off by 7:30 at the latest, but usually earlier.

I contacted him on Tuesday to say that our daughter wasn’t able to meet him this Thursday so would he like to see her Friday night or Saturday instead. I don’t think that she has ever cancelled a Thursday night.

He said that wasn’t acceptable because he made plans for her to have dinner with his parents who are visiting for the month of February. He texted her and she told him that she was going to an open house that was being held at one of the high schools she is interested in attending in September.

I told Dave that she was sick too (she is off school today) so that might prevent her from doing anything.  His response: “Oh but you can plan to take her to Claremont when you know my parents are here…big surprise.”

I told him that I have no control over when high schools hold their open house.  It runs from 6 – 8 and she has a cavity to get filled before that at 4:30 p.m.  Again, if she still feels like she does, she might not attend anything. I reminded him that his parents are here for a month and they can see her whenever she isn’t at school or dance practice or have plans that are important to her.

His response: “Oh thanks…as usual you do your own thing around your schedule not others. If (daughter) isn’t coming for dinner then there is no reason for me to be up the peninsula so she will have to wait until Saturday to get the raffle tickets and money.”

3 thoughts on “The Good, The Bad and The Ugly”